Greece & Aegean Cruise In Outside Stateroom 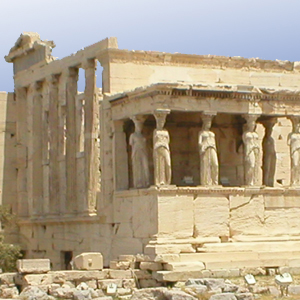 You’ve seen photos of the ancient Acropolis, dating back to the 5th century BC-now’s your chance to see it in person. You’ve watched the Olympics on TV-now’s your chance to visit Olympia, legendary home of the first Olympic Games. You’ve dreamed of cruising in the Greek Islands-now’s your chance to sail into the deep-blue waters of the Aegean Sea and visit these islands yourself. All of this and more await you on this budget-minded Greece tour and cruise.Step back in time on your guided visits to many of Greece’s historic sites. In addition to the Acropolis, visit the archaeological site of Mycenae, dating back to 1350 to 1200 BC; the amazingly well-preserved, 2,300-year-old open-air theater in Epidaurus, which still seats 14,000 spectators; and the medieval Byzantine Citadel of Mystra, a castle founded in 1249. Also visit the spectacular mountain landscape of Meteora with its 24 rock-top monasteries set in almost inaccessible sandstone peaks.You’ll also enjoy a 4-night cruise on the Aegean Sea cruising to some of the world’s most beautiful islands. Visit Mykonos, Greece’s most famous cosmopolitan island with its seafront village, sandy beaches, and whitewashed houses; Kusadasi, Turkey, where an included excursion takes you to the fascinating Roman, Greek, and Byzantine excavations of Ephesus; Patmos, where St. John the Divine wrote the Revelation; Rhodes, one of Europe’s largest medieval towns with ramparts and palaces built during the Crusades; Heraklion, Crete, nestled picturesquely between two mountain ranges with archaeological treasures and beautiful scenery; and Santorini (weather permitting), still an active volcano offering one of the world’s most breathtaking panoramas. Picturesque fishing villages, breathtaking blue waters, and ancient sites offer a sightseeing vacation of a lifetime. Your budget travel to Greece for a spectacular Greek tour and cruise is truly an affordable dream vacation!

ATHENS — Athens provides a good study in how the New South coexists with the Old South. A lively music scene
(supported by students from the University of Georgia) flourishes in the bars, clubs and coffeehouses of the restored
downtown (it brought the world such bands as R.E.M. and the B52s). But you don’t have to look far to find the Old South: It’s apparent in the many Greek Revival homes and buildings that dot the city, the best example being the Taylor-Grady House. The University of Georgia, across the street from downtown, boasts a number of these Greek Revival buildings, including Demosthenian Hall and the president’s house. The university is where you’ll also find the Georgia Museum of Art (a collection heavy in 19th- and 20th-century American and Italian Renaissance paintings). Off campus you’ll find the Church-Waddel-Brumby House, the oldest surviving residence in the city, now serving as the visitors center. Athens is also home to the fragrant State Botanical Gardens of Georgia. Nature trails wind through the gardens of native flora — the rose garden is especially nice (it blooms May-November). Southeast of Athens in Washington is the Robert Toombs House, the restored home of a recalcitrant Southern politician who hated the North for political reasons and hated the Confederacy almost as much for not electing him president. One of the least mellow individuals the smooth-as-silk South has produced, Toombs never gave up his secessionist fervor or his cantankerous manner. 66 mi/106 km east of Atlanta.

Rhodes (rodz) or Ródhos, island (1981 pop. 40,392), c.540 sq mi (1,400 sq km), Greece, in the Aegean Sea, near Turkey; largest of the Dodecanese island group. Its fertile coastal areas produce wheat, tobacco, cotton, and olives. Tourism and fishing are important. Colonized by Dorians before 1000 B.C., it reached its height as a commercial and cultural center in the 4th-3d cent. B.C. Julius Caesar studied at its renowned school of rhetoric. After its decline, Rhodes was an ally of Rome. Captured (1204) from the Byzantine Empire during the Crusades, it was held by the Knights Hospitalers (1282-1522) and the Ottoman Turks before it was taken by Italy in 1912. In 1947 it was ceded to Greece. The famed Colossus of Rhodes (see under colossus), a statue erected (292-280 B.C.) by the citizens of the ancient capital
city of Rhodes, was destroyed by an earthquake in 224 B.C.

Prices are per person, land or cruise only, based on double occupancy. Offer subject to availability and change without notice. Some restrictions may apply. Please ask us for details.

Charges not included in the land vacation price: airfare to and from the start of your vacation; airline baggage fees including checked and/or excess baggage fees; Federal inspection fees for the Federal U.S. Customs and Immigrations; agricultural tax; other per person taxes imposed by government entities; applicable cruise taxes, fees, fares and port charges; passports; visas and vaccinations; transfers; tips to your Tour or Cruise Director, Local Host, driver, Local Guides, and/or ships’ crew; gratuities on ferries, trains, and cruise ships; laundry; telephone; minibar; alcohol, beverages, and food outside of the contracted menu as presented at a hotel or restaurant (these extra items will be billed to you before leaving the hotel, ship, or restaurant); additional excursions and activities not listed as ‘included’ in the itinerary; porterage at airports or train stations; Travel Protection premiums; and all other items of a personal nature.

Click on the buttons below to request a quote on this deal or contact us directly with further questions or comments.

Request A Quote Send To A Friend Have A Question? Contact Us

Send To A Friend